What Is Release Of Administration?

What is Release of Administration?  How does it work?  When does it apply?  What is it in comparison to full administration?

In Ohio, we have two processes, which we can navigate through the Probate Court.

First Process - Full Administration:
The way a full administration works is an estate gets opened up, someone gets appointed as an administrator.  Normally, about 90 days after the appointment of the fiduciary, will the estate be opened up.  A fiduciary is appointed first. About ninety days after that (approximately 6 months), you have to file an inventory or accounting and appraisal of the estate and the assets that the estate has.

Ultimately, the estate gets closed.  Typically, that takes about twelve to thirteen months.  Some estates have taken longer than that typically because some third party is in litigation or something had gone wrong to extend or prolong the process.

Second Process - Release of Administration is a streamlined process:
With the full administration, you are looking at a timeline of nine to twelve months before the estate could be closed.   But for the release of administration, it's almost instant.  Typically, we open the estate on a Monday, and by Monday a week later or maybe two weeks later, you'll have the estate closed.

It is a VERY technical process to qualify for the release of administration.  There are two main kinds of groups or classifications.

Note:  Another one that does get used or employed is when there's real estate only.  It could qualify for Release of Administration.

Drawbacks to the Release of Administration:

When you do a release of administration, you were essentially telling the Probate Court that your
loved one who's passed away only had this, this, and these assets.

It was such a small amount of assets that you knew exactly how much the assets were worth and you're asking the probate court to transfer them to the next of kin.  The probate court is not going to get involved with the inventory, accounting, and creditor claims in a release of administration.  What they are going to do is review the itemized list of the assets, and then you'll get a court order to transfer those.

One issue that we often see when it comes to Release of Administrations is that you have to be very specific.

If your loved one had a bank account and that bank account had say $5,494.00 in it, the documents have to say exactly that.  Most banks will reject a court order that says to transfer a different amount to a specific person because the amounts aren't right.  And in those scenarios, you have to go back to the probate court and ask them to reissue the documents.

Therefore, the release of administration doesn't include what is called the “magic key”.  When you get a full administration, you get the “magic key” to be able to go and open up any bank account, any IRA, life insurance policy any asset that had your deceased loved one's name on it.  You have the magic key to gain access.

With the release of administration, you don't get the magic key.  It's just a court order to transfer.

Littlejohn Law is here for you to answer any questions you may have.  If you are not sure which release your family qualifies for, give us a call today at 740-346-2899. 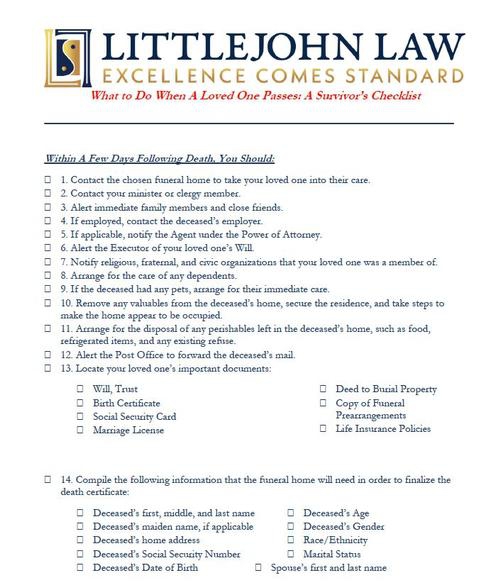 What to Do When a Loved One Passes: A Survivor’s ChecklistRequest Information